Everything included in this blog site is under trademark, 2017. We appreciate your honoring and respecting such. Nothing can be printed or used in any way without written (not email) permission by Patrick A. Trottier, The Institute of Emergent Organizational Development and Emergent Change® (The Paris Convention for the Protection of Industrial Property. As of January 2019, the Convention has 177 contracting member countries).

The EODC® Platform co-creates the conditions by working with an organization in partnership  so emergent change becomes apparent, is influenced more fluidly and naturally, and ‘change’ itself is viewed and experienced as a normal, continuous, emergent, real-time process.

The EODC® Platform supports the shift from a hierarchical, static organization into an integrated, collaborative, network organization that is continually forming with the changes, complexities, opportunities and challenges of its internal and external environments – an ’emergent organization’

Before we get into the platform for creating Emergent Organizations™, it must be noted that:

The EODC® Platform is a ‘leadership development platform’, meaning that this is the work of ‘leaders’ throughout an organization at every level and function. (where ‘leader’ is not necessarily occupied by ‘position’).

Through this EODC® Platform process of creating an Emergent Organization™, leaders learn to become Leaders by ‘doing the work of leaders’.

The work of leaders is simply to create and continually develop a viable, and a vibrant organization for the 21st Century.

Now, to move on to the platform itself…

The following EODC® Platform attempts to describe an emergent, dynamic approach to manifesting such ‘conditions‘ to create an ‘Emergent Organization™’.

This was and continues to be a challenge to draw multi-dimensional concepts onto a two dimensional medium (words), so bear with me. (I could use a hologram at this point.)

The following diagram describes the main elements of the EODC®  Platform:

Developing a ‘comfort-zone’ with the process and dynamics of ‘re-framing’ is a critical, inherent aptitude all through the EODC® Platform in manifesting real change within oneself, and throughout an organization. 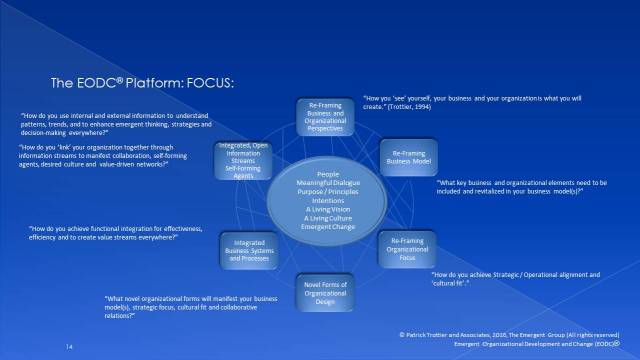 Below is a more detailed breakdown.

The following detailed EODC® Platform attempts to describe an emergent, dynamic approach because we know that each organization is unique with its own special history, stage of development, culture, leadership style and attributes, issues, strategies, concerns and goals.

Each organization is ‘unique’ so the organization chooses where to start in the EODC® Platform depending on its needs, interests, curiosity, degree of comfort and readiness to make a real difference.

First, I know this looks like a lot, but work with me as we walk though it, and describe its elements.

I told you it was detailed… now lets break it down to its simplicity.

The ‘core elements’ of the EODC® Platform displayed in the diagram above are;

Everything in the EODC® Platform diagram above is interconnected and interrelated – a gestalt of sorts.

All elements of the EODC® (the ‘what’ and the how’) integrate, synergize with, and influence all the other key areas mentioned below. Thus, they all form together as they influence each other as an emergent organization takes form.

This gives it a unique capability, one that gives flexibility within the platform itself depending on the curiosities, interests and the needs of the organization.

Think of such as a soup being created from the blending of many flavors and ingredients.

Thus, before we get into the specific elements of the EODC®, it is important to understand that the EODC® is not a linear, step-wise static model.

Try this as a small exercise. Identify an element of the platform that connects with your interests, curiosity or whatever brings you to it. Then move your attention to an element that relates to the first element in some way. Now do a third one, or a multiple of elements that you see relate to the first and second area of importance.

Eventually, I bet you will connect all the ‘elements’ in the diagram below – a ‘networkk’ that constitutes a ‘whole systems’ approach.

In this way the platform is itself ’emerging’ based on the interests, needs and wants of an organization.

In this way, this platform is not linear, a formula, nor is it formalized – or static.

In this way, the EODC® Platform is within itself an emergent, living approach to creating ’emergent organizations’.

So now, with this understanding of the platform’s fluidity, lets start with the FOCUS ring.

Look at the outer ring called FOCUS – the ‘what’. Then, move along the outside ring to get a gist of the key elements of FOCUS.

The key organizational and people elements pertaining to the FOCUS ring are:

Each core element such as FOCUS, and their specific key elements, as those listed above will be further described and explained in the right hand column ‘posts’ of this website (as ‘Perspective’ is linked above to its own ‘post’ above; https://goo.gl/N6ZE1d ).

As previously mentioned, the EODC® Platform may start at any area of the platform, thus, we begin ‘where the client is’ and then move anywhere throughout the platform. This is quite different from the traditional, linear, prescribed change management programs.

The Core Elements Within The EODC™ Platform

The following describes each of the core elements of the EODC® Platform:
FOCUS, PEOPLE, PROCESS, RESULTS and FOUNDATION.

FOCUS – ‘the what’.
The core elements:

These six elements provide the key critical organizational elements through which the organization is viewed and developed within the EODC® Platform in order to create an emergent organization. These areas of FOCUS integrate, are linked, are synergistic, and form a ’gestalt’ as the process of creating an emergent organization itself forms. The EODC® Platform can then be seen as setting up the conditions so ‘change’ becomes apparent and influenced more fluidly, naturally and is viewed and experienced as a normal, continuous, real-time process.

Note: In traditional 20th Century change efforts, an organization tries to move from ‘A’ to ‘B’ (if, it even gets there), while the world has moved to ‘F’.

PEOPLE: What people are doing within the areas of FOCUS. When engaging people throughout the EODC® Platform, it is important to understand that how we ‘see’ the organization is what we will create. We look at the organization through a different ‘lens’. There is an old saying; ‘You can change the dance but the song stays the same.’ Many organizations move things around like restructuring but soon people find out it is still fundamentally the same organization with the same inhibiting issues. Also, important to developing emergent organizations is creating an openness to explore, imagine, to be curious, to imagine, to re-frame and to continually emerge perspectives.

PROCESS: The tools, processes and methods to facilitate organizations to become more emergent. Such is not to be confused with the traditional connotation of the word ‘process’ in traditional approaches to change which have rigid steps of prescribed behaviors, planned change and change management models for set activities throughout the organization of which people are ‘done to’ rather than ‘done with’.

Process, in the context within the EDOC® Platform, refers to a wide range of free open individual and collective behaviors and alignments encouraged within defined outcomes and boundaries of responsibility. The emphasis being on outcomes and results that integrate as the EODC® process moves along as opposed to specified activities and behaviors.

RESULTS: The conditions which manifest an emergent organization to be more adaptable and fluid with real-time change. These change results themselves continually evolve as the organization is a living organism which interacts with its changing environments and its challenges, opportunities, complexities and rates of change.

Note: As previously mentioned, each key FOCUS area and their specific elements, as described in the EODC® Platform, will be further described and explained in the right hand column ‘posts’ of this website under their specific headings of;

Thus, all areas of the EODC® Platform co-create the conditions within an organization so emergent change becomes apparent, is influenced more fluidly and naturally, and ‘change’ itself is viewed and experienced as a normal, continuous, emergent, real-time process.

The EODC® Platform can be used with groups, projects, functions, departments, and / or an organization as an integrated whole system.

I am glad that the EODC® Platform is extremely pliable to ‘form’ to the needs of different organizations which are in different stages of development and unique in their history, culture, purpose, principles, vision, intentions, organizational forms, business strategies, concerns, hurdles, and objectives.

We consider EODC® itself as an emerging, living thing. As new perspectives, ideas, technologies emerge, so will EODC® evolve. In this way, it reflects and manifests what it suggests as a pathway for organizations to become ’emergent organizations’ in order to deal with the complexities and increasing rates of change as ‘a natural way’ of experiencing and doing things.

There is so much to explore and learn. I am hopeful that EODC® does become ‘a living thing’. Such, its own existence and essence will always be emerging and never become complete and finite… and thus, reflect the reality of the world it exists in – forever emerging.

In this way, EODC® will become a living, emerging, continually evolving form of itself.

I think that would be very cool.

The EODC® Platform is a ‘leadership platform’, meaning that this is the work of ‘leaders’ throughout an organization at every level and function (where ‘leader’ is not necessarily occupied by ‘position’).

Through this EODC® Platform process of creation, leaders learn to become Leaders by ‘doing the work of leaders’…

The work of leaders is simply to create and continually develop a viable, and a vibrant organization.

The EODC® Platform somewhat emerged from this prototype of an ’emergent organization’ design.
Right click on mouse and choose ‘view image’ to enlarge. 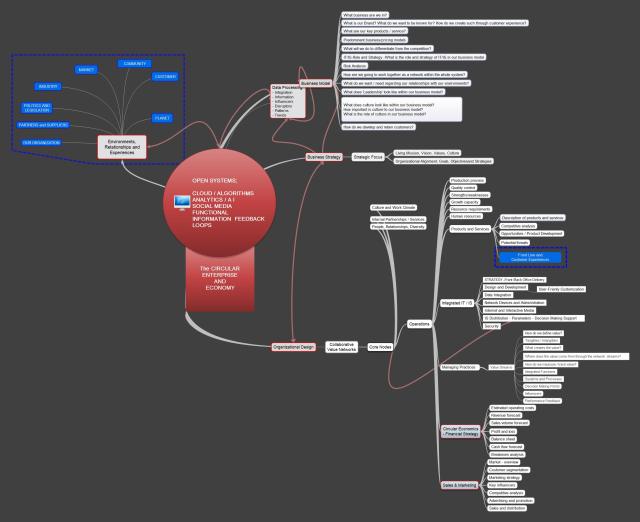 1 Response to The Emergent Organizational Development and Emergent Change® Platform