Everything included in this blog site is under registered trademark, 2017. We appreciate your honoring and respecting such. Nothing can be printed or used in any way without written (not email) permission by Patrick A. Trottier, The Institute of Emergent Organizational Development and Emergent Change® (The Paris Convention for the Protection of Industrial Property. As of January 2019, the Convention has 177 contracting member countries).

My proposition: “Even in what we call ‘chaos’, patterns do exist.”

With due deference to Margaret Wheatley’s assertion that the definition of chaos is the absence of patterns, I am asserting that such patterns do exist within chaotic states.

Definition: ‘Chaos’; a state of extreme confusion and disorder. A formless and disordered state.

The rub is that in this state of a lack of perceived patterns, which we call ‘chaos’, the patterns have not been discernible, or they have a very quick “half-life” – emerging and disappearing so quickly that they are not perceived because we have not have had the ability / technology to identify, measure and display them in a way we can understand.

One way to be able to discern ‘patterns’ is through what we call ‘pattern display interface’.

Pattern display interface displays information in a way that is easier for the human mind to understand influencing patterns, change and complexity.

In the above gify picture, lets say you are standing on a beach in North Carolina and you are in the middle of the storm above. It would seem that the world immediately around you is in a state of ‘chaos’ with the wind blowing, building being torn apart, things blowing around where they should not be, it may seem like the storm is unending and the end of the world is near.

However, as one sees the patterns in the above picture, one can understand where things are at, where they may be going and it is not the end of the world.

Maybe it is not that ‘chaos’ is the absence of patterns, maybe it is our inability to ‘see’ indicators of the ebb and flow of patterns, and thus ‘we experience chaos within formations of change’.

Maybe ‘chaos’ is just something we name as such, because we cannot see the influencing patterns forming.

Maybe complexity is just something we name as such, because we cannot see the patterns forming into different patterns of ‘form’.

Maybe ‘disruptors’ are just something we name as such, because we do not see the influencing patterns coming on the horizon and the potential impact such may have on the status quo of which we so diligently hang onto.

Maybe ‘change’ seems so difficult because we do not understand the dynamics of change itself.

Many say that we have ‘information overload’.

Maybe it is not the amount of information that is the issue, maybe it is how we display information for the human brain to better understand the underlying patterns and issues and that, in itself, is the issue.

Throughout an organization at every level, what if we could better understand what is influencing change, what that change means, and thus, how to better flow, or adapt to such?

How would this manifest connection, integration, collaboration and engagement?

How would this break down the ‘boxes’ of territorialism, isolation, disengagement, and traditional hierarchical structures?

How would such manifest more effective collaborative strategies, conversations, decision-making, action, and emergent, continuous learning throughout an organization?

Would such help us understand the dynamics of change itself, relationships, performance, outcomes?

What kind of an organization would this look like?

Could we call this an ‘Emergent Organization™’ that views ‘change’ as a natural flow and form rather than view ‘change’ as something that is alien and prompts us to hold onto what we know even if the status quo does not work the way we want it to, or ‘fit’ with our rapidly changing internal and external environments?

a. Partial Thinking (in terms of the separate and different parts of things)

b. Relational Thinking (in terms of the relation of parts – connecting the dots)

c. Relevant Thinking (in terms of degrees of what is significant and important to an
issue at hand)

d. Gestalt / Whole Systems Thinking (in terms that the integrated whole is greater than the sum of the parts)

e. Synergistic Thinking (in terms of the degrees of relationships and degrees of
influence in terms of working together)

Emergent Pattern Thinking manifests the understanding of patterns of emergence over time, the degrees of relationship and density of attractors, influencers, pattern influencers, determinates, and novel forms  – and how the integration of such pattern displays can optimize how the human holographic brain works at its optimal in awareness, understanding, insight, decision-making, etc.

Emergent thinking / patterns can also be the optimal connectivity of people, and the ‘manifestation’ of human group understanding, insight, innovation, decision-making, etc.

Through technology such as IT/IS/AI pattern interfaces, one may begin to conceive of the realm of potential human capability. Such may also give a unique ‘human experience’ to such connectivity.

From such, one may interconnect, organically understand and form new types of relationships, communications, connections, influencers and thus, new form of organizations.

With the advent of a new revolution in information technology, especially AI, I believe we will be able to develop interfaces to support and augment human information processing for greater understanding, decision-making, adaptation, strategic influencing, etc., regarding  emergent changes in ourselves and in our internal and external environments. 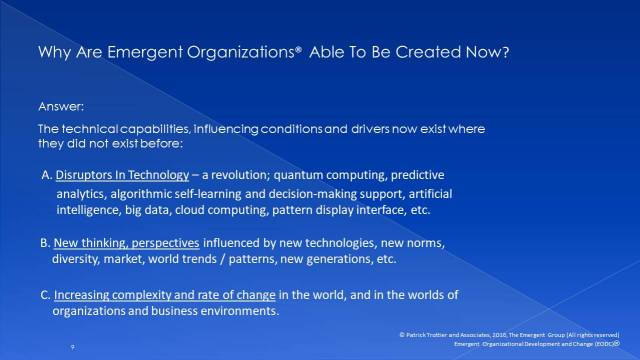 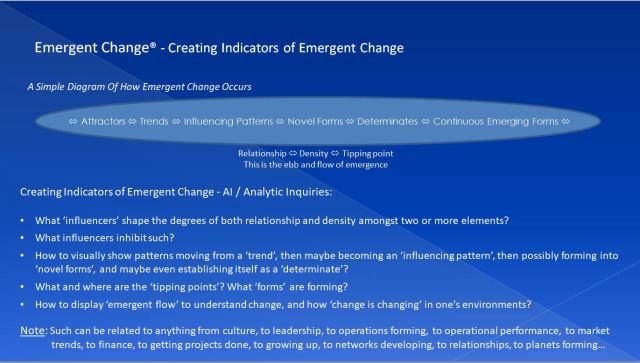 I can envision that we will be able to understand the internal ‘drivers’ behind our actions and decisions as patterns on a constant basis and thus be able through awareness, shift attitudes, behaviors, decisions and actions, and the degree thereof, to become more congruent with the changes in our environments.

By ‘drivers’,  I mean more than things like ‘economics, changes in  market expectations, and social norms and pressures, etc.’ I also mean the manifestation of greater consciousness of our beliefs, assumptions and perceptions that influence how we are, and what we think, and do. – and thus, be able to more naturally ‘shift’ our perceptions about ourselves and the emerging world around us.

Would not that be something? Where people in organizations and our social networks, within open systems, can understand better what is beneath the ‘ice-berg’ in themselves as well as other individuals, groups, and / or organizations. I believe that people could shift their beliefs, assumption and perceptions more readily by manifesting a greater comfort zone with such things.

Such understanding, processes and ‘a greater comfort zone with change’ would becoming the ‘norm’ whereas today few people step into that zone.

This brings us to…

The Law of Emergent Transforming™

Thus, ‘change’ becomes natural – and not another ‘fear of’, or ‘project’ or ‘task’ to add to the list of things to do.

Through ‘re-framing’ how we ‘see’ things, a shift in how we see ourselves and our worlds occur.

This shift in our feelings and perspectives manifest a difference
in how we ‘see’ things, and thus, in what we create, naturally…

“There are no known laws in physics that place an upper limit on what percentage of the universe can exponentially self-organize into freewill systems such as us humans.

Indeed, physics allows the possibility that all the energy of the universe can be converted into a single, conscious system that itself is a network of conscious systems. Given enough time, what can happen will eventually happen. By this axiom, universal emergent consciousness has emerged via self-organization somewhere ahead of us in 4D spacetime. And because it is possible, it is inevitable. In fact, according to the evidence of retro-causality time loops, that inevitable future is co-creating us right now just as we are co-creating it.”

So, let us explore what would it be like, lets say, where people become ‘self-organizing agents’. What would that kind of organization look like? Would such hold the attributes and structures of the traditional hierarchy, or, some other form such as collaborative, emergent networks naturally emerging to our rapidly changing norms, values, beliefs, demands, opportunities, challenges, strategies within our environments?

As individuals and groups, what happens when we begin to really understand the underlying driving elements such as beliefs, assumptions, and perspectives that are influencing our decisions and action?

What would happen if such are ‘shared’ within a continuous emergent environment as a whole organizational system where organizational strategies and decisions are understood at much deeper levels. What would be the impact and the consequences of such?

The following is a ‘core tenant’ of ‘Emergent OD and Emergent Change®’, where chaos and complexity become only what we label them to be. Through an understanding of the dynamics of chaos, complexity and ‘pattern thinking’, people can have a deeper understanding of ‘emergent change’ itself, and become more effective in our understandings of ourselves, our worlds, our strategies, and our decision making.

Just my thoughts for today.

For more on Emergent Organizations™, Emergent Change® / Chaos and Complexity:

The Institute For Emergent Organizational Development and Emergent Change®
https://emergentchange.net/

About Patrick A. Trottier

I am a 30 plus year applied Organizational Development practitioner having honed my craft in the U.S., Canada and internationally. Presently living in beautiful Vancouver, B.C., I am currently developing the next evolution of O.D. termed; 'Emergent Organizational Development and Emergent Change® (EODC)®, and focusing on Emergent OD®, Emergent Change® and the development of Emergent Organizations® within my professional practice.
View all posts by Patrick A. Trottier →
This entry was posted in Uncategorized. Bookmark the permalink.